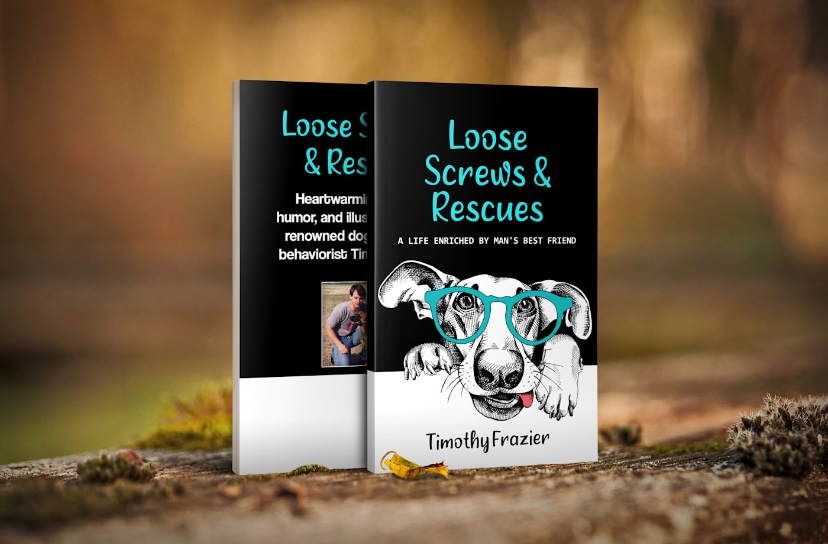 Laughing is an important part of recovery–trauma recovery, bad day recovery, physical recovery, 2020 recovery…the Collab Team here in Clearwater is soliciting funny stories to include in our lifestyle section. If you have one, be sure to get in touch!

Here is one to make you smile from the best dog trainer in the world, Tim Frazier, who just released a new book, Loose Screws and Rescues. This story just so happens to also feature Dr. John A. King.

Best Book About Dogs in Clearwater

An excerpt from Loose Screws & Rescues by Timothy Frazier.

I’m a former police K9 officer. Because of that, I tend to have some complacency about things that are mildly terrifying to normal, sane human beings. I’ve spent a great deal of my life carrying a handgun, and a great portion around large, aggressive dogs. I’m used to both, and familiarity breeds complacency.

Khumba is a Presa Canario. A breed developed by mixing pit bull terriers and Canary Mastiffs. He is essentially a 140 pound brindle pit bull. He isn’t an aggressive dog under normal circumstances, but like any dog, can display an intimidating attitude if he senses a surprise threat or challenge.

My friend John was born and raised in Australia and later moved to the United States. He worked very hard over several years to become a U.S. citizen and to partake of the exceptional freedoms we have left here, especially in the State of Texas. One of the passions that John and I share is the exercise of our second amendment right. Both of us typically have a handgun strapped on everywhere we go. John loves dogs, too. He loves dogs that know their place, and that aren’t trying to kill him. I love dogs at another level, and consider a dog that tries to kill me a pleasant challenge to build a friendship upon.

One day I needed to give John a ride to pick up a vehicle from his mechanic. I also needed to pick the massive warrior Khumba up from his owner for boarding. Khumba and I were buddies. I often boarded him at my house when his owners had to travel. The big Presa Canario was used to being let out of his yard to run to my truck. He would jump straight into the back seat and settle in for his ride to Fraziertopia. It was a joyous ritual.

John isn’t just a guy who carries a gun. He’s an extremely physically fit guy who has invested a lot of time and money in training with guns in self defense scenarios. When I let Khumba through the gate the beast joyfully ran up the driveway and jumped in the back door of the truck. Khumba wasn’t expecting to see someone in the front passenger seat. In his experience, It had always been devoid of occupants other than myself and him before. Khumba reacted to the discovery of the unfamiliar Australian with a snarl and hurled himself teeth first at John’s face. Had it been anyone else, the result would have been tragic. Most likely with a trip to the emergency room, a lawsuit, and Khumba being unfairly labeled or even put down as a vicious dog.

Fortunately, John’s reaction was catlike. He burst out of the truck, before Khumba’s teeth made contact, and backed away to create some distance. I had no time to breathe a sigh of relief, because as John backed away he drew a Glock nine millimeter handgun from his waist and leveled the barrel at Khumba, who was displaying the command presence of a mother grizzly bear protecting her cub. I had made it to the back door and grabbed Khumba’s tail with both hands to prevent him pursuing John. After convincing John that I had the dog secure he kicked the door closed and holstered his weapon. I then took a little time to introduce the two of them properly. Once the initial surprise was over Khumba settled into a nap on the back seat and we drove on to our remaining errands without incident. John didn’t nap, however, and did a lot of “checking his six” to constantly confirm that Khumba was still lying down for the rest of the drive.

The incident made an indelible imprint on both Khumba and John. Khumba still spends boarding time at my house, and John is the only visitor that he barks at during those times. John was lucky he had the skills to escape with his face intact, and Khumba was lucky not to be ventilated by John’s Glock.

For more AWESOME stories about dogs, be sure to pick up a copy of Tim’s book, Loose Screws and Rescues, on his website or Barnes & Noble using the buttons below. If you’re local to North Texas and need a great dog trainer, check out www.grapevinek9.com.